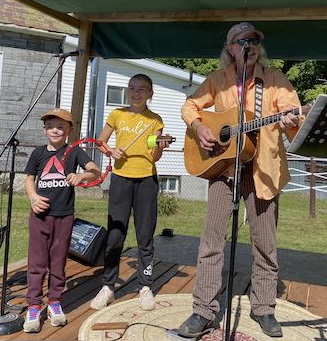 Matt Dickson and friends at the McDonald’s Corners Fair

It was a fine time at Granite Ridge Education Centre today. It started with Teilhard Frost doing a 40 minute “musical instruments from stuff you find” concert to about 200 kindergarten to grade 4 pupils, most from GREC and some bused in from Land O Lakes. They were spellbound.

Then there were four 50 minute sessions for grade 5 –8 students from GREC and Prince Charles PS that went for the rest of the day as the kids rotated through:

1) Teilhard demonstrating how to make music with anything at all.

2) Lily Legacy making hand drums from sonotubes and tape – brilliant! Each pupil got to make and decorate one.

3) Two tech teachers in the woodshop who had the kids each make a very playable flute out of abs tubing. They even learned to use power drills to drill the finger holes.

4) Grandmother Judi who taught the kids indigenous songs that they then sang accompanied by the drums that they had made.

The whole day was magic.

Thanks to BSIC and Live Wire for helping to keep the music alive in our schools!

A Thank You Note …

Thank you for your kindness and generosity. Our family appreciates this bursary very much. It is not something we would usually apply for as we are aware of other families in need, however due to our circumstances this year, this is a wonderful gift.

Thank you for taking the time to review our application. Deb is an anazing teacher and I’m so happy that Avalon has this opportunity with her.

Two workshops and a concert

In collaboration with the Limestone District School Board

“…. If you hadn’t recently considered the incredible impact that Live Wire in the Schools has had in our community lo these many years, soak it up here in the “concert” portion of this video!  James Hill, one of the world’s great virtuosos on this instrument, providing rich instruction and inspiration to our kids.  We are so lucky! ….”
Scot Caldwell