A Letter from Jessica Wedden 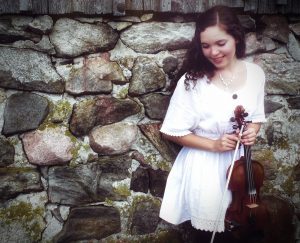 Attending David Francey’s songwriting workshops at Granite Ridge Education Centre, sponsored by Blue Skies in the Community and Live Wire Music Series, was an immense privilege for me and many other students at my school. His techniques, stories, and humour around his songwriting experience was inspiring, educational, and allowed our inner songwriters to come to light without hesitation. When he worked with students one-on-one, I had the opportunity to share my songwriting ideas with him, and after he helped me, he asked about my involvement with music. David was so kind to ask for my contact information, and as a result, came to one of my performances with Jon McLurg in Perth. It was a pure joy to talk to him and see him again, and I couldn’t have been happier when he said he hoped to share the stage down the road.

A few months later, Kathryn Briggs, Terry Tufts, and Beth Tufts, who are mutual friends of David and I, were scheduled to back David at his Christmas Show in Almonte. They were all so thoughtful to ask me if I could be a special guest and join them in backing David on some of his songs. I loved rehearsing with them, and the show was beyond thrilling. I am so fortunate to have met David at his songwriting workshops which led to performing in his Christmas show, and now to Jon and I rehearsing with him for future shows, including his upcoming show in Kingston in the Live Wire Music Series!  He is a musical hero to me and I couldn’t be more grateful to back someone as kind, humble, and accomplished as David.

Thank you very much to Al Rankin, Live Wire, Blue Skies in the Community and everyone else involved in giving students the privilege to meet and learn from incredible artists such as David Francey. My gratitude is immeasurable.

KCVI, Kingston
What a way to start the week! A thrilling performance from a world class musician in our own beautiful KCVI auditorium. This kind of passion and dedication to a lifelong skill, such as music, is so well demonstrated by a performer like Mr. Pearson. He spoke to our students about his journey, and how hard work and resilience were the most important tools one could have for success. A real life example of lemons becoming lemonade!
We so appreciate the funding assistance provided by Blue Skies in the Community to help bring performers such as Gareth Pearson to KCVI. This kind of enrichment activity is essential in demonstrating an important pathway to some of our most talented and often vulnerable students.
This contribution also gave our school community an opportunity to come together to enjoy music, dance, clap to the beat and feel the power of experiencing the energy that comes from a live performance.
Thank you for investing in the Arts in the Limestone District School Board!
Warm regards,
Kelli Caravan, KCVI Music Department
KCVI, Kingston
I would like to thank you for your ongoing support of music and the arts for students in Kingston. Al Rankin recently brought Jacob Moon to KCVI for a workshop performance with our students, which was a wonderful enrichment activity. Students from a variety of classes (including Music, English, Art andTechnology) were thoroughly engaged and  entertained.
Lexa Foreman, Teacher, KCVI
St. Andrew’s Presbyterian Church, Kingston
The Tuskegee University Golden Voices Choir performed a wildly successful concert in Kingston on March 4 th . The BSIC grant proved to be a big morale booster. The audience of 350 concert-goers gave the student choir repeated prolonged ovations. The choir director reported that the singers were ‘through the roof’ in spirits as they left Canada to continue their tour. Thank you again for helping!
Tom Mawhinney, Tour Organizer and Sponsor
Granite Ridge Education Centre, Sharbot Lake
On behalf of both the students and staff at the Granite Ridge Education Centre, we would like to thank you for the Jacob Moon concert/presentation. Our students were thoroughly impressed with his performance. We hope that similar performances can take place at our school in the future so that we may enjoy more.
Corrie-Lyn Shields, Co-President of GREC Student Council
Centennial Public School, Kingston
Hello various folks who have partnered (knowingly or unknowingly) with one another to support The Arts at Centennial Public School this year!
Here’s a little video to let you know where some of your money has gone and what we’re doing with it. Hopefully it conveys my appreciation and the appreciation of our students.  The focus in this video is specifically the amazing little workshop and concert we had with James Hill– an amazing opportunity I latched onto just a month after receiving our LLF grant to buy ukes.
Skot Caldwell, Sponsor Teacher, Centennial PS

Drummond Central Public School, September 22, 2017
Our first Forest Friday on Sept. 22 was a special full-day event! All sixty students received the opportunity to learn hoop-dance to enrich the music and dance curriculum in the outdoor classroom. The children were inspired to choreograph their own hoop-dance movement blending four different techniques which were associated with the four elements: earth, air, water, and fire. Thank you to ‘Blue Skies in the Community’ for their assistance in funding Meghan Robinson’s hoop-dance workshop (‘Wider Circles’) in this outdoor education enrichment program.

Clarendon Central Public School, October 6, 2017
On Friday October 6 the Celtic Rathscallions held a tin whistle and ukulele workshop at CCPS.  Students also received some specific instruction on the chords and melody of the Trews song, Highway of Heroes. We are hoping to have some students confident enough to perform it in the community for our Remembrance Day ceremony! We are excited. Thank you, Blue Skies sponsors!

Snow Road Community Hall, October 6, 2017
Corin Raymond received a standing ovation from an appreciative audience of 72 adults on October 6.
BSIC helped to give us the security to plan and execute this event as it was the first one of its kind and we were not sure how well it would be attended.

Naismith Memorial School November, 2016
Our students were unbelievably thrilled to have Leo Brooks come to our school and teach them not only how to make a drum, but how to play it, too!! The children were engaged, learned new skills, and were so proud to have something that they could keep and play at home. In addition to Leo coming to our school, our students continued learning how to play their drums during their regular music classes, and then culminated with performing them for their parents and the school at large at our annual Holiday Sing-A- Long in December.

The impact the BSIC grant has had on our students is unmeasurable! Our music program began a tradition of creating these drums, and the grade fives look in envy at their grade six counterparts, itching for the day to be able to make them, as well. It was looking like we were not going to be able to afford to run the program this year, and BSIC is the reason why were!! The students have learned not only invaluable skills associated with their instrument, but they’ve also created something themselves they get to keep, and of which they are oh so proud. We could not be more thankful for having  had the support of BSIC.

Prince Charles Public School, Verona
Just a quick word of thanks … for the Ariana Gillis workshop … Ariana had all of our students from Kindergarten to Grade Eight enthralled with her voice for nearly an hour. She delighted in answering their questions and was truly a wonderful role model for aspiring musicians in our school.
The support of Limestone, Blue Skies and Live Wire makes these experiences possible for our students.

With much appreciation on behalf of our students and staff,
Peter Mouncey, Principal
Prince Charles Public School

Storrington Public School, Battersea
Dear Blue Skies in the Community and Live Wire,
On behalf of our Grade 6, 7 and 8 students, I would like to say thank you very much for supporting the visit of singer-songwriter Kate Weekes who came to our school today. Her performance was a beautiful combination of storytelling and singing, with a focus on her experiences living in the Yukon.

The students were engaged in her performance and had many questions for her. We really appreciate being able to provide this opportunity for our students and wanted to let you know that we are grateful for your support.

The Frontenac News
Meghan Robinson, a local artist and dancer, along with storyteller and musician Laurie Clark, gave kids at Land O’Lakes Public School (LOLPS) a fun and musical introduction to hula hooping on Monday morning.
Robinson, who lives in Clarendon, taught students the basics of “hooping” while Clark, who lives in McDonald’s Corners, played a wide range of instruments, creating different soundscapes for Robinson to interpret with her hula hoop.

The students really took to the lessons and were dancing around the gym in no time, spinning the hoops around their arms, hips, and necks and laughing out loud…
This hooping workshop was part of Blue Skies In The Community, an outreach program that has been fostering the arts, artists, and musicians in the area since 1988. Blue Skies In The Community has been responsible for Sheesham and Lotus, Craig Cardiff, and ukelele master James Hill visiting LOLPS in the past and performing for the kids.